There are four places I can search for recent obituaries — all of them require that a searcher go through some hoops to use them. Ancestry, GenealogyBank, and NewspaperArchive all require subscriptions. Newsbank is available free online for Pima County residents who hold a valid public library card. All will be checked to fill in information about George and Clara Scholefield’s grandchildren.

Searching NewspaperArchive first, I find A. Major Brodie on the front page the day of his death because he died in a fire.1

They said A. Major Brodie was trying to get to a door in a bedroom when he apparently was overcome by flames and smoke in his home at 929 N. Hoff Ave. about 5 am. 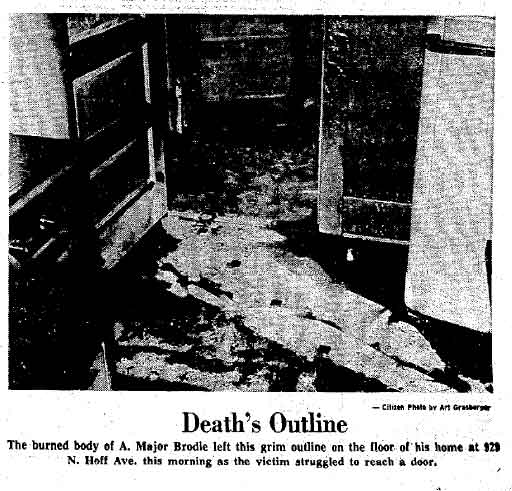 A. Major had worked for the State Highway Department and was a bachelor. He was reportedly a polio victim and suffered from arthritis but did not use crutches. Officials would not speculate about whether his conditions contributed to his death. A few days later, an obituary ran which named his cousins: Blissie H. Lee of Globe, Ariz., Catherine Schnitter of Reno, Nev., Virginia Matison of Placerville, Calif. 2 These names (aside from the spelling) agree with those in Helen Brodie’s obituary and provide some leads that need to be checked.3

Catherine Schnitter was born in Arizona on 26 Oct 1913 and died 26 Dec 2005 in Reno, Nevada.4 She was preceeded in death by her parents and all of her siblings: Virginia Matson, Blissie Lee, Carol Tuttle, and George Scholefield. She was survived by her husband Hans (no children are named). The couple owned a portrait studio for several years and enjoyed fishing for salmon out of Crescent City, California. Katie had also worked for the Reno Police Department and the Nevada Bank of Commerce.

The spelling of Matson for Virginia’s last name reveals an obituary for her which states that she died on 3 Jun 2005 and:5

Ada, who went by Virginia, was born in Rosemont, Ariz., on April 8, 1915, on a kitchen table in a U.S. Forest Service ranger station. She and her brother and sisters rode their horses to school when they moved to Portal, Ariz., in the Chiricahua Mountains.

Virginia worked as a dental assistant during college and later worked for the Sacramento Bee and for Pacific Bell Telephone Company. She married Charles E. Matson three months after meeting him at a dance in Reno. They had one daughter. During retirement, the couple ran a commercial fishing venture out of Crescent City, California — apparently the one her sister Katie fished with?

Additionally, articles about Virginia’s marriage appeared in the Reno News. She married Charles E. Matson, who was a parachutist with the 101 Airborne Division in England, France, Belgium, Germany and Holland, on 17 Nov 1954.6 She carried on a Matson family tradition by wearing the dress which was worn by her future mother-in-law and sisters-in-law at their own weddings.

This site uses Akismet to reduce spam. Learn how your comment data is processed.

Scroll back to top