The censuses I located in the last post lead me to believe that I have a family group.

I know this is the correct John Hawkins because he is near his daughter Susan Moore and her husband in 1830 and 1820. In 1810, John appears to have been missed or he was living somewhere else. From 1820 to 1800 there are two men, Benjamin and William, who are of an age to be siblings of John. In 1800 there is a man in John’s home who could be his father.

In 1790 there are two Johns. One is noted as “Senr” the other as “Junr.” Many might expect that this immediately indicates that one is the father of the other. However, at the time of this census, the suffix could indicate simply that one is the elder and the other younger. They could be related — or not. They could be uncle and nephew, cousins, or as I propose, father and son. The elder John has in his home two men who are of an age to be Benjamin and William.

The censuses also tell me more about John’s family. I know three of his children, but it turns out that he may have had more. 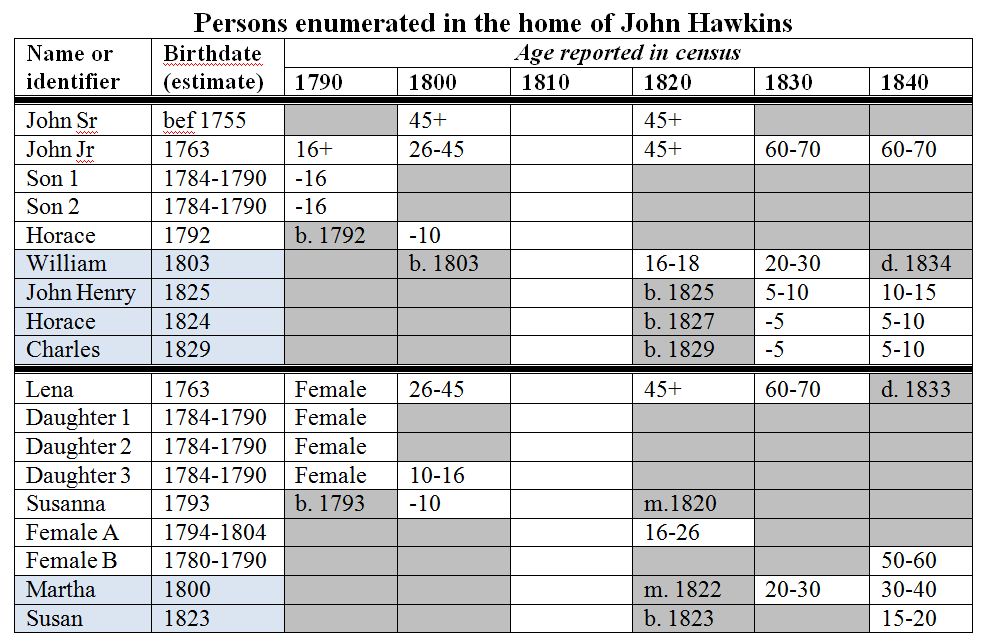 In the 1820 census, there is a female who is of an age to be Susanna Moore (Female A). She was married earlier in the year so it is possible that she was enumerated twice. By 1830, William is living with his father after his marriage. Based on these numbers, John and Lena possibly had at least 7 children; 3 boys and 4 girls. In 1840, there is a Female (B) who is of an age to be one of the three daughters but could also be another relative, hired help, or a friend.

This site uses Akismet to reduce spam. Learn how your comment data is processed.